Today we harvested our first few Dragon’s Tongue beans (this is a funny story).  Is it not the most beautiful bean you have ever seen?! When I first saw these in a seed catalog I knew it was something that I wan 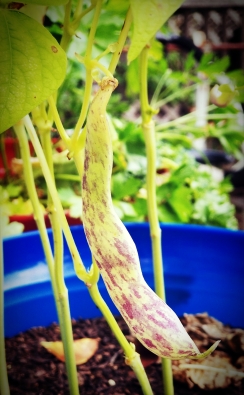 ted to grow in our heirloom garden. I’m so happy that we did.  The stunning purple and pale yellow pods add life to the garden. And it is different! I’m a firm believer that if you are growing something, then don’t grow the same old things that are in the market.  The chances that I would visit the Netherlands, India, or Indonesia, are slim to none but I can grow a taste of each of them right here in Dothan, Alabama, USA!

Now back to that funny story I alluded to earlier.  The plants pictured are grown in pots on our back deck.  We experimented with so many plant varieties this spring that every piece of worked soil was teaming with produce – NOT bad problem.  Bush beans exist well in pots so we gave it a go. Later when the heat got to the spinach, it was pulled and the beans were planted there as well.  So we have two areas to harvest from.  Naturally the plants in the ground grew faster than the ones in the pot.  So we are now harvesting both locations despite planting a week apart! Back to the story.  I began harvesting on the back deck . As I reached out to snip the pods I noticed a sticky, almost velvety texture and immediately thought, “What pest left this sticky substance behind. YUCK!” The next pod was on the same plant so it was no surprise to me that it felt the same way but when the pods on the plants in the ground on the opposite side of our property felt the same, I realized IT SUPPOSED TO BE THAT WAY! I harvested a few more beans & left them, along with the rest of the bounty for the morning, in the basket on the counter.  When the children woke and saw the beans, I told them about the “sticky situation”.  The oldest immediately picked them up and proceeds to look at me like I’m crazy. “Your hands are just callous and you cant feel it.” So I grab one then another and another and you guessed it – the sticky situation is no longer a situation.  Just to establish my own sanity I send the children out to the garden to touch the plants still on the vine. Those pods are sticky. So while these are called Dragon’s Tongue Beans due to their appearance, their sticky texture adds another reason, if you ask me. They are what’s for dinner!

Sending unique heirlooms & a taste of world – from our family to yours!Blog