If you talk to any of the older generation, of the South you’ll hear stories of all sorts! Those stories of hardship, loyalty, & true love – are real, and of the best kind, for they remind us of where we ourselves come from.  They warn of paths taken and failed. Thus, as a society, we avoid those pitfalls.  These stories are not all grim. Some highlight choices that led to much success for their generation.  One of those wasn’t so much a choice – family farming.  Children were often involved because there just wasn’t enough money to involve anyone else. Others served in supervisory roles on their farms but they were involved! This brings us to the topic of today’s blog – “Children & Gardening”.

Last night our daughter had a sleep over at our home with one of her besties. They have known each other for a long time and have seen each other through pre-teen life.  We have been so busy lately that they haven’t had this type of time together.  So this morning when I asked my daughter to water the garden with her friend, I have to admit I expected some resistance from my child.  She is only 11 but the vocabulary on that one… Unexpectedly, there was no resistance. She grabbed her little friend by the hand and  said, “Come on let’s water the garden.” I was shocked.  When I made it outside I took over watering and gave her and her friend the joy of harvesting ripe produce.  As they worked along I could hear her explaining what the different plants were, their nuisances, etc. I was so proud! I felt even better when her friend tasted a ripe tomato right from the vine with the biggest smile. Mission accomplished! 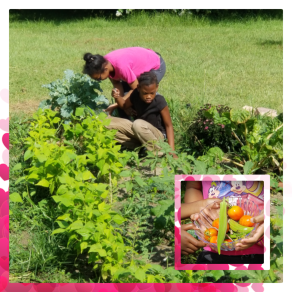 It is like I feel the need to teach all the kids that come over something about the garden.  Someone did that for me & for our children.  That person was my mother.  For as long as I can remember she has always grown something.  When her health didn’t allow for a traditional garden, she planted in pots.  She suffered from depression and this thing was so instrumental in  helping her cope with the stresses of life.  I didn’t realize the seed she planted within my heart until she became chronically ill.  I too needed a way to cope and gardening became one of my coping mechanisms. The torch is passed.

Our children have since learned the hard work involved in bringing produce to the table.  They recognize crops planted in fields & they know what blight and rust are and how to treat it.  They taste the difference in what we grow and what we are at times relegated to buy. They have come to know what vegetables to use for home remedies for illness.  Our youngest even grew her own garden and refused assistance from anyone else.  When she harvested her first cucumber she was elated! Our oldest took plant science technology this past semester of high school & has put that knowledge to work in our gardens.  Although sometimes they do not want to do the hard work, overall they like to do the hard work.  They are outside and active most of the day instead of planted in front of a video game. What more could a parent want?

So why have we stopped the age-old tradition of teaching our children to grow their own food? Times have changed, true but the value is the same. Children and gardening, it’s a nice combination.  So go you parents! Plant a beautiful seed in the hearts of your children.  Take it from someone who knows – they won’t forget it.