Thanks for joining us as we continue our Working With the Summer series.  I hope it helps someone out there to not completely give up! If you are like most of us gardeners, you need your hands in the dirt at least once a week to feel fulfilled. It’s like an itch that must be scratched. This makes winters and summers all the more difficult to endure! Difficult, not impossible – how?

Back in the day when I just had a small inkling of a feeling that I wanted to grow food, I had no idea how much planning went into gardening.  Admittedly, I was so naive. I can laugh at myself now that I have learned a little bit more.  Two excellent times of the year to plan out your garden space is Summer (for Fall) and Winter (for Spring).  During the Summer many of the Spring time cash crops have died back or been pulled leaving garden beds looking bare. Fret not – take to the air-conditioned house & map out next years garden beds!

There are many more planning tips we could share but these are our top 4.  Join us again next week as we close out this series. So to your farmers, homesteaders, and gardeners – what tips can you share? Head on over to our Facebook page or our Instagram page and share. After all, sharing is caring! It is hot people! I mean seriously the heat around these parts is absolutely awful! It’s not JUST the heat but the humidity offers little help to the situation.  The garden is moaning and groaning just the same as we are. Many of our spring crops have died or became unproductive and have been pulled.  Others succumb to disease and you know they had to go! So our garden beds look a bit bare after weeding. It can be a bit discouraging. We are in those dog days of summer where it’s so hot that many plants just will not grow – so what do you do? Over the next few weeks we will be exploring this topic by sharing with you what we have done to work with the summer heat.

Believe it or not there are plants that flourish in the summer heat and humidity.  We  got smart this year and anticipated a need for summer lettuces and we researched just what would grow in ninety plus degree weather.  We found many options out there! This does take a moderate amount of planning since waiting till the heat is upon you is simply too late. We planted several heat tolerant leafy greens in the spring with everything else and they did all right I guess you could say until the weather hit eighty-five degrees.  At that point these plants just took off! Making it clear that heat is what they love.

One such of these plants is Malabar Spinach. It is a star of Bain Home Gardens so I’m sure you have read about it before on our blog post. This vining plant is actually not spinach at all but because it can be used as a substitute it has adopted the name. We grow the green and red varieties and we have found both tasty but the growth of the green variety has been absolutely PROLIFIC! The taste is not for everyone but if you are using it in smoothies or juicing you likely will not notice much of a difference. I personally use it for everything! Stems are thick and are great for juicing or smoothies and the leaves I use in salads. While spinach and most lettuces have bolted from heat this plant is taking it all in giving us tender salad greens all summer long!

Among other heat tolerant plants are beans.  We planted so many varieties of beans this year from Oriental Yard Long Beans to Garbanzo beans! We were more impressed with some than others but the key is that they grew in the heat! 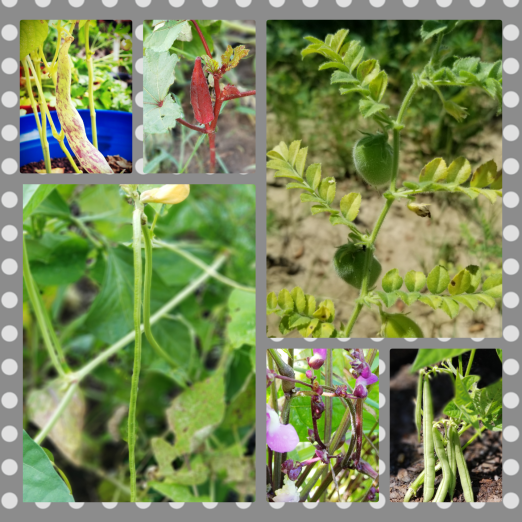 We also planted lots and lots of okra. Of these we planted three different types and all are holding up very nicely to the dog days of summer!

Finally we planted lots of herbs and many have held their own against the summer heat such as our five varieties of Basil, Cilantro, Thyme, and Rosemary.

Check back with us next week as we continue our series on working with the summer heat. Till then stay hydrated and try not to get discouraged – we can do this!

We recently took a trip out-of-town for only four and a half days. It was just what we all needed before going back to work, school, and starting college.

It rained so much while we were gone! I was somewhat relived since we do not have an irrigation system on a timer yet. However, the rain and humidity while we were away, caused the weeds to rebound like never before! Extra large, woody okra (beautiful yet useful only for seeds) on the stalk along with over ripe tomatoes – it was horrific! I hate, HATE, HATE to waste food! In addition, since we are front yard gardeners, there was a real need to tackle the situation head on! Our son began a process that practically took all day while his father tackled the rest of the property.

I really do not know how I would manage without my son, he does such a fantastic job managing the garden! Shout out! Anyway things look so much better now and only one bed of 3 in the front have been take care of thus far. Just to think – FOUR DAYS! While away the weeds will play!

A benefit to vacationing is that there are always bounteous amounts of produce to harvest! Automatic happiness! We had so much produce to clean & store it was admittedly overwhelming.

We are learning the real value of homesteading! We are currently able to do like the squirrel and store away for the winter – which I personally find very exciting! It is one more way we become self-sufficient and that, after all is the goal! Yes!

I’m positively sure that as we continue on this adventure that there will be far more interesting experiences, stories, successes and failures. I’m taking it ALL in and learning today how to make a better tomorrow for this family. Thanks for joining our adventure!

If you have ever been stung by a bee, wasp, or hornet, you know the pain associated with these occurrences is not fun! In fact, once stung, a sort of PTSD sets in and anytime the buzz of a flying insect is heard – YOU RUN! Did you know that somewhere around 3.3% of the population is very allergic to bee & wasp stings? In fact, 40-100 people die yearly from anaphylaxis.  Anaphylaxis is defined as an acute allergic reaction to an antigen such as a bee sting. I find myself in the aforementioned 3.3% which is why gardening can prove to be a bit of a challenge. Every gardener wants bees right? We plant flowers to draw them, allow veggies to go to seed for them, and avoid using chemicals that would harm them – all to PLEASE THE BEES! Bees & wasps have come to be frenemies of mine.  While I adore observing them hard at work in the mornings and evenings, pollinating the veggies, I do try to keep my distance.  The last time I was stung I had what I felt to be a severe reaction but in actuality it was a mild anaphylactic reaction. I was warned that if there were a next time, things could possibly be worse, fatal even. Due to a heart condition, the EpiPen that so many others carry, is not an option for me so I must be extremely cautious! Saturday, even with all of my cautious care, while picking tomatoes, I was stung! It was scary!

I knew the wasps loved that area but in a rush to beat the rain, I became careless. I can’t say that I saw my life flash before my eyes or anything but there were certain steps that I knew I needed to implement immediately to decrease chances of a severe reaction.  Here is what I did:

Although I am a nurse by trade, I advise anyone to talk to your medical professional before trying any of the above remedies.  These things happened to work for me.  48 hours later I have some stiffness in my joints, especially the effected area, as well as some residual itching however, things are improving nicely – all without a visit to the ER.

Today we harvested our first few Dragon’s Tongue beans (this is a funny story).  Is it not the most beautiful bean you have ever seen?! When I first saw these in a seed catalog I knew it was something that I wan

ted to grow in our heirloom garden. I’m so happy that we did.  The stunning purple and pale yellow pods add life to the garden. And it is different! I’m a firm believer that if you are growing something, then don’t grow the same old things that are in the market.  The chances that I would visit the Netherlands, India, or Indonesia, are slim to none but I can grow a taste of each of them right here in Dothan, Alabama, USA!

Now back to that funny story I alluded to earlier.  The plants pictured are grown in pots on our back deck.  We experimented with so many plant varieties this spring that every piece of worked soil was teaming with produce – NOT bad problem.  Bush beans exist well in pots so we gave it a go. Later when the heat got to the spinach, it was pulled and the beans were planted there as well.  So we have two areas to harvest from.  Naturally the plants in the ground grew faster than the ones in the pot.  So we are now harvesting both locations despite planting a week apart! Back to the story.  I began harvesting on the back deck . As I reached out to snip the pods I noticed a sticky, almost velvety texture and immediately thought, “What pest left this sticky substance behind. YUCK!” The next pod was on the same plant so it was no surprise to me that it felt the same way but when the pods on the plants in the ground on the opposite side of our property felt the same, I realized IT SUPPOSED TO BE THAT WAY! I harvested a few more beans & left them, along with the rest of the bounty for the morning, in the basket on the counter.  When the children woke and saw the beans, I told them about the “sticky situation”.  The oldest immediately picked them up and proceeds to look at me like I’m crazy. “Your hands are just callous and you cant feel it.” So I grab one then another and another and you guessed it – the sticky situation is no longer a situation.  Just to establish my own sanity I send the children out to the garden to touch the plants still on the vine. Those pods are sticky. So while these are called Dragon’s Tongue Beans due to their appearance, their sticky texture adds another reason, if you ask me. They are what’s for dinner!

Sending unique heirlooms & a taste of world – from our family to yours!Blog